The temple is administered through a legally registered Trust, which has 80G exemption from the Government of India. A duly constituted Board of Trustees diligently oversees all aspects of the temple administration; it’s the belief of every member on the Board that they are answerable to Divine Mother Annai Aadhi Parasakthi, Divine Mother Mandhira Paavai and the 18 Tamil Siddhas for every activity carried out at the temple and every paisa spent.

The temple employs no paid labour except a housekeeper for sweeping the premises every day. Contractual labour is employed for special occasions such as preparing food for the monthly Annadhaanam on Full Moon (Pournami) day or for other special poojas and celebrations.

All other activities related to the daily administration of the temple including the conduct of spiritual rituals, special poojas and velvis are handled entirely by a group of lay devotees, who have volunteered to perform these tasks as a service to Annai and the Siddhas. Those entrusted with the task of serving at any of the Sannidhis in the temple are suitably trained as per the instructions of the Divine Mother and are only then allowed to serve at the Sanctum Sanctorums. Similarly, all the volunteers who serve either as officiating priests or their assistants for any of the special poojas and velvis at the temple, are also entrusted with those responsibilities only after suitable training as per the instructions of the Divine Mother. 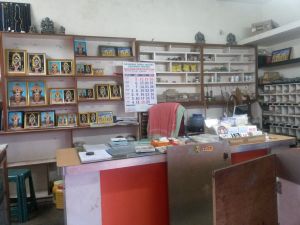 The temple office is situated next to the Sannidhi of Vinai Theertha Vinaayagar and is the administrative hub of the temple. It’s here that devotees purchase or make donations towards the following:

The temple office also houses an extensive stall that helps devotees to procure the following: